Metallurgical testing has been conducted on composited samples representing both primary and oxide/supergene mineralised material from Barns and Baggy Green. At Barns, gravity and cyanide leaching of the gravity concentrate and tailings recovered 98.8% of the gold in a supergene sample, and an average of 97.5% of the gold in primary samples. At Baggy Green, recovery in a supergene sample was 94.3% while recoveries for primary samples averaged 98.7%. 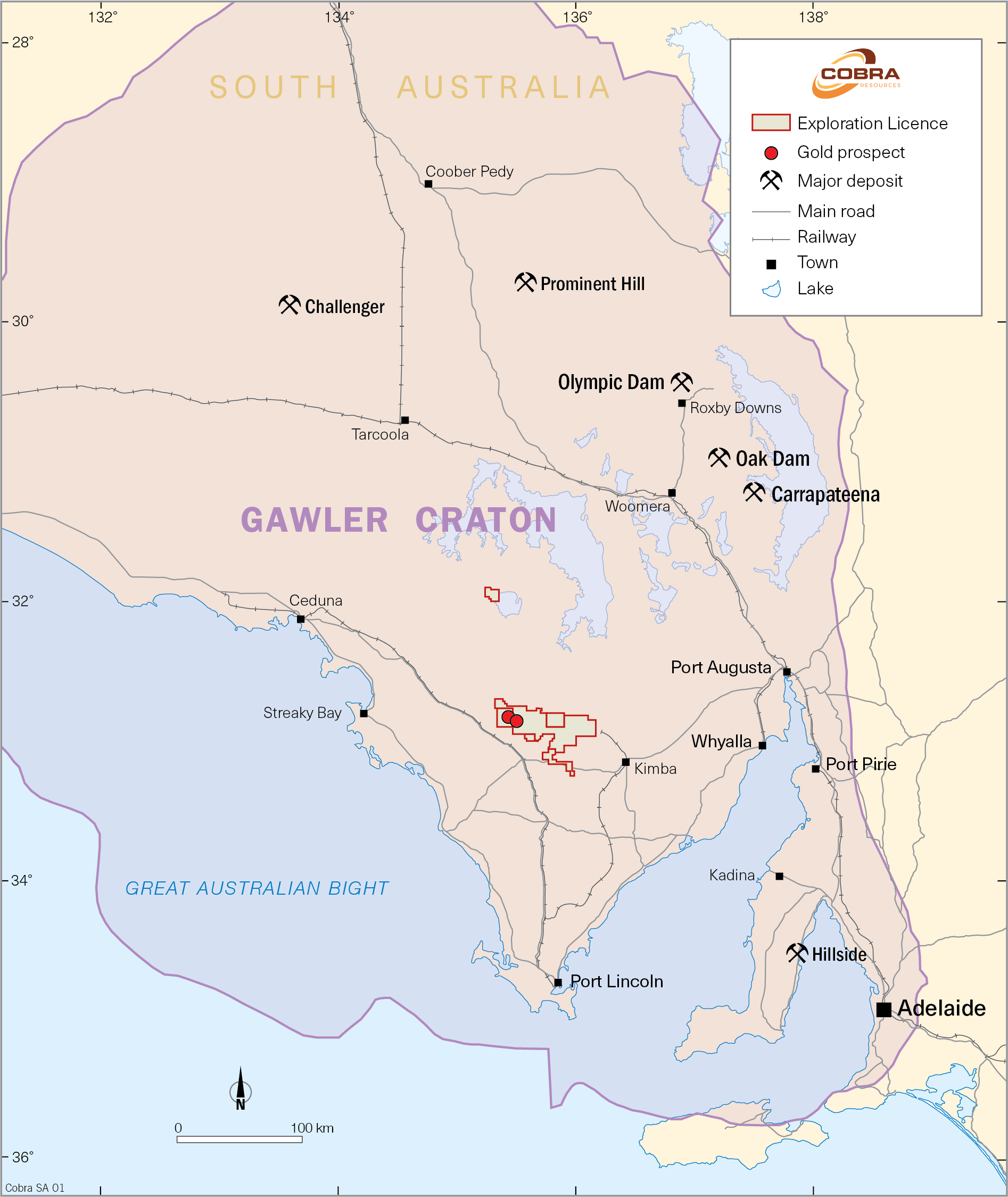 Between 1996 and 1997, Newcrest Mining Ltd (“Newcrest”) completed reconnaissance-scale calcrete sampling survey on the tenement (then EL 2188) on which Barns is now located, with initial samples spaced at 1 km. A number of adjacent reconnaissance samples returned anomalous gold values over the Barns area. Infill sampling at 500 m centres completed by Newcrest in 1998 defined a large gold anomaly with a peak value of 31 ppb. The dimensions of the Newcrest anomaly, using a threshold of 2.5 ppb Au, approached 4.5 x 1.5 km.

In early 1999, Newcrest, which was enjoying considerable exploration success in the Cadia district in New South Wales, determined to dispose of EL 2188. Check sampling completed by Adelaide Resources (now Andromeda Metals) validated the existing anomalous gold-in-calcrete results and the company acquired a 100% interest in the property in late 1999.

The Barns, Baggy Green and White Tank gold deposits of the Wudinna Project were discovered by drill testing gold of calcrete geochemical anomalies.

The Gawler Craton preserves a complex and prolonged tectonic history spanning the interval c. 3200 – 1500 Ma. This includes episodes of felsic magmatism, followed by sedimentation and bimodal (felsic and mafic) volcanism, and then by felsic volcanism (Dept Mines, 2019). 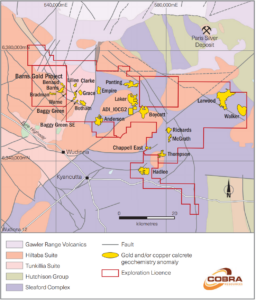 As shown in the figure below, the Central Gawler craton gold province forms an arcuate belt wrapping around the southwestern margin of the Gawler Range Volcanics and in part following the boundary between the Mesoproterozoic (c.1595 – 1570 Ma) and Paleoproterozoic (c. 163 – 1608) rocks (Fraser et al, 2007, Reid & Hand, 2012)).

The Gawler Range Volcanics (GRV) are described by Parker and Flint (2005) being composed of pinkish medium-grained granite with xenoliths of gneiss and foliated grey granodiorite; foliated biotite granite and massive cream-coloured, weakly foliated leucogranite. The GRV were emplaced between 1595 and 1575 Ma and are coeval with the Hiltaba Suite. The GRV are flat lying and relatively undeformed. 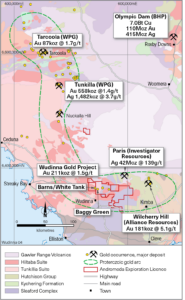 The variation and common characteristics between intrusion related and orogenic gold deposits has been discussed by several authors such as Duuring et al, 2007, and Sillitoe and Thompson 1998. The figure below shows a schematic of the interrelationships of granitoid, intrusion related and orogenic gold deposits of the Yilgarn Craton in Western Australia.

Fraser et al. (2007) demonstrated that the gold systems of the Central Gawler province share similar timing and involved fluids with like properties with the Olympic Dam IOCG province, in support of the existence of a gold metallogenic province. Fraser et al (2007) and Skirrow e al (2007) demonstrate that both the IOCG and gold hydrothermal systems were broadly coeval with magmatism of the Hiltaba Suite and Gawler Range Volcanics, at ~1570 to 1595 Ma. 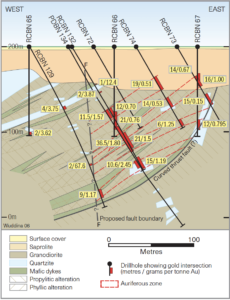 Within the Wudinna project area, the geology is described by Drown (2003) as an area covered by Quaternary sediment, which limits surface exposures, and deep weathering profile to greater than 50 m depth (Drown, 2003). The area is dominated by the Archaean Sleaford Complex (in the east) and the Tunkillia Suite (in the west). The Sleaford Complex is described by Parker and Flint (2005) as foliated migmatitic quartz–feldspar–biotite (garnet) gneiss and augen gneiss with possible local BIF, namely the Hutchinson Group within the Project area. The Tunkilla Group rocks are moderately deformed granodioritic gneiss (Drown, 2003). The regolith profiles are described by Mayo & Hill (2016) and Parker et al. (1985) as siliceous and variably calcareous sandy sediments forming old dune ridges.

The Wudinna gold project includes the Barns, White Tank, and Baggy Green prospects. Gold mineralisation is hosted within granodiorites of the Tunkillia Suite that is variably deformed and altered. This has been attributed to the intrusion of the Hiltaba Suite Granites (e.g. see Drown, 2003; Fraser et al, 2007).

The host lithologies for the Barns, White Tank and Baggy Green is granodiorite made up of plagioclase, K-feldspar, quartz and biotite with minor apatite, allanite, magnetite and zircon all within a weak, subvertical foliation. Also present is quartzite and gneiss occurring as blocks within the granodiorite and minor pegmatites and mafic dykes (e.g. Figure 3 6; Drown, 2003 and Fraser et al, 2007).

Identified at the Barns gold prospect is a zoned alteration system with an outer chlorite-epidote-sericite-rutile-hematite and inner zone of sericite-pyrite-gold. The outer zone of alteration is identified with chlorite replacing biotite, plagioclase altered to albite and K-feldspar containing abundant microcrystalline hematite inclusions. The inner alteration zone is of pervasive sericite replacing plagioclase with disseminated pyrite and the k-feldspar generally intact (Drown, 2003; Fraser et al, 2007).

Gold mineralisation at the three deposits is located in shallowly west or northwest dipping shear or fault zones. The mineralisation is weakly sulphidic with pyrite dominant at Barns and White Tank, and chalcopyrite at Baggy Green. Gold mineralisation is hosted in 1 to 10mm-wide quartz pyrite veins within the inner alteration zone, with gold occurring as free particles generally less than ~100μm in diameter. The mineralised veins strike north-south or northeast- southwest and dip moderately to the west or northwest (e.g. Drown, 2003).

A review of the structural geology at the Barns deposit by King (2001) showed that the gold mineralisation may be controlled by NW trending structures and the proximal association of the Hiltaba Suite intrusives, granite and granodiorite. Reverse shearing was noted in drill core with west dipping structures displaying gentle to moderate dips of shears and veins.

A study of the aeromagnetic imagery identified a magnetic low coincident with the Barns mineralisation and is interpreted to be magnetite destruction associated with the propylitc alteration. Lady Alice Mines (2019) undertook a structural review of the Wudinna project in 2018 with the following conclusions:

The geological interpretation (shown below) by Drown (2003) indicated a flat dip of mineralised zones generally following lithological contacts with the interpretation validated by the Lady Alice Mines (2019) investigations.

The gold mineralisation within basement rocks has been shown to correlate well with gold-in-calcrete anomalism from surface sampling. An extensive study of the regolith profiles and extents was carried out by CSIRO CRC LEME (Sheard, 2007). This study showed that shallow transported cover (<5-10m) over basement rocks may be related to lithogeochemical anomalism of Au, Cu, Ag, or As. The regolith profile and landform relationships developed as part of the study by CSIRO identified several regolith profiles in the study area. The regolith and landscape evolution study assist in the understanding of landscape position and local landforms are both crucial when selecting appropriate geochemical sample media and for interpreting their trace element assay values.

Barns, Baggy Green and White Tank fall within 6km of each other and are shallow and potentially open-pitable. Each of the deposits remain open and step-out drilling can potentially add further resources, while other prospects in the Wudinna Project also show potential to contribute ounces. Recent metallurgical testwork confirms gold recoveries exceeding 97% are achievable at Barns using a conventional flowsheet, with testing of Baggy Green mineralisation is foreseen.

In 2018, LAM, a joint venture party, requested Optiro to investigate an alternative orientation to the interpreted mineralisation at Barns, White Tank and Baggy Green aligned with the strong regional northwest/southeast orientation observed in:

A nominal cut-off grade of 0.3 g/t gold was used for interpretation of the mineralisation at Barns, White Tank and Baggy Green. Optiro provided preliminary resource estimates for Barns, Baggy Green and White Tank which were based on the interpretation of a series of stacked lodes with an overall strike consistent with the regional northwest orientation and a shallow dip to the southwest.  Since then, Optiro obtained the weathering surfaces and density data used by Mining Plus and has updated the preliminary resource models with these data.  In addition, two horizons of supergene mineralisation have been interpreted within the saprolite material at Barns that replaced three of the previously interpreted dipping lodes.

A total of 255 bulk density determinations have been undertaken at Barns on either historical or recent diamond drillholes and 185 bulk density determinations have been undertaken at Baggy Green on recent diamond drillholes.  Average values were calculated from the complete dataset by Mining Plus using a combination of weathering and mineralisation.  Density values assigned to the mineralised domains in the resource models range from 2.29 t/m3 to 2.73 t/m3.

The mineralisation at Barns, White Tank and Baggy Green has been classified as Indicated and Inferred in accordance with the JORC Code. The Mineral Resources have been classified on the basis of confidence in geological and grade continuity and taking into account data quality (including sampling methods), data density and confidence in the block grade estimation, using the modelled grade continuity and conditional bias measures (slope of the regression) as criteria.

The likelihood of eventual economic extraction was considered in terms of possible open pit mining and results from metallurgical testwork. Metallurgical testwork from material at Barns and Baggy Green indicated gold recoveries ranging from 94.3% to 99.3% and averaging 97.7% across all samples from a combination of conventional gravity and cyanide leaching.

The Mineral Resource estimate, as at March 2019, for the Barns, White Tank and Baggy Green deposits is reported in the table below.  This has been classified and reported in accordance with the guidelines of the JORC Code.  The Mineral Resources have been reported above a 0.5 g/t gold cut-off grade to reflect current commodity prices and extraction by open pit mining.

Note: inconsistencies in totals due to rounding

For the Wudinna Gold Project, comparison of the 2017 and 2019 resource estimates indicates the tonnage has increased by 15% and the grade decreased by 8% for an overall increase in the contained gold by 5%.

For Barns the global estimates are similar, with the 2019 estimate reporting a slightly higher tonnage and lower grade, for a decrease of 4% in gold ounces.  Within the 2019 model a slightly higher proportion of the resource has been classified as Indicated. While the alternative orientation has not significantly changed the global resource estimate at Barns, it does present alternative strategies for future exploration and potential resource extension.

At both White Tank and Baggy Green, the 2017 resource estimates plot on the grade-tonnage curves as estimated in 2019, but at higher cut-off grades of almost 1 g/t gold.  This is in-line with the lower cut-off grade that was used for the mineralisation interpretations in 2019.  For both deposits this has resulted in additional tonnage at a lower grade, with an overall increase in contained gold ounces.

Following the discovery of the Challenger deposit in 1995 by Dominion Mining Ltd and Resolute Mining Ltd (Williams et al, 2003) extensively from calcrete (soil) samples, an database of over 15,000 soil samples has been collected by previous and current companies both within the project area and regionally. 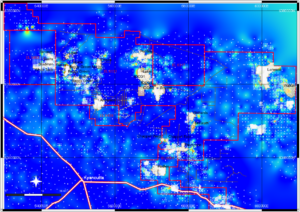 Analysis by Anderson (Anderson, 2019) looked to refine geochemical targets by normalising raw gold in calcrete by calcium. The calcium adjusted gold values were designed to account for the relative amount of calcrete in the samples and level gold anomalism accordingly. Other elements such as silver and arseneic were also considered to differentiate between alluvial gold anomalism, as opposed to gold soil anomalies that were likely to represent basement mineralisation. 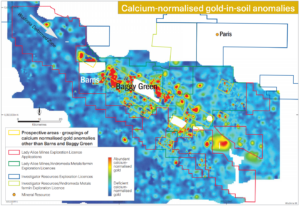 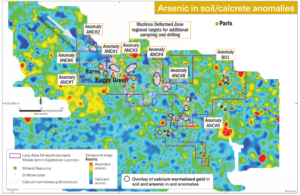 The Stage 1 calibration exercise established that the primary pathfinder element associations in the mineralised fluids were defined as Au-Ag-Cu-Bi-Te-W-Mo. 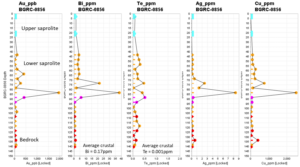 Multielement geochemistry was also used to conduct a Mineral Component Analysis (MCA) which enabled anomalous results to be viewed in the context of the sample medium. An example MCA is shown for Baggy Green below. 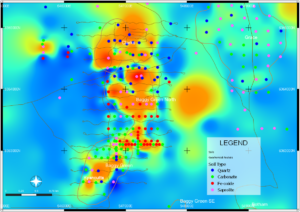 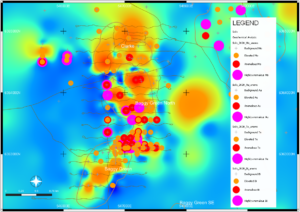 During the second half of 2020, the Company the company is planning 3 exploration programs with the following strategic objectives:

On 31 October 2017, Andromeda announced that it had entered into a binding agreement with LAM, pursuant to which LAM can earn an up-to 75% interest in the Wudinna Gold Project (the "Wudinna Agreement").

Under the terms of the Wudinna Agreement, LAM will fund up to A$5,000,000 through a staged earn-in over a (maximum) six year period in order to earn up to 75% equity in a joint venture vehicle over the Wudinna Project (the “Wudinna JV Co”) as follows:

Once the Wudinna JV Co is formed, LAM and Andromeda will contribute to further expenditure in accordance with their respective equity positions. LAM will act as operator of the Wudinna Project.