The Prince Alfred Copper Mine is located approximately 100km north east of the town of Port Augusta in South Australia and thought to be a strata-bound sediment hosted copper orebody.
The mineralisation is located within the Yednalue Anticline and is situated in the lower part of the Tapley Hill Formation. The original mine operated during the late 19th and early 20th century, recovering approximately 40,000 tonnes of ore at a ~5% copper to a depth of 170 feet (~51m). No production records are known to have survived from its period of operation.
History

The Prince Alfred Mine was discovered in 1866 and is located 100km north-east of Port Augusta in South Australia. Copper ore with a sprinkling of gold was discovered in a fairly wild and remote area of the Flinders Ranges, and the following year the Prince Alfred Gold Mining Company Ltd was formed in Adelaide. The mine and the company were named after Prince Alfred, Duke of Edinburgh, the first member of the royal family to visit the Australian colonies.

Mining seems to have occurred in three separate episodes between 1869 and 1909, with a gap from 1874 to 1889. Most of the production is likely to have occurred in the 1870s, and the masonry engine and crusher houses were built during that first period of mining. It appears that three separate companies operated the Prince Alfred Mine in those episodes, at least one of them based in Melbourne. It is not unusual for mines in remote areas with high costs to have sporadic periods of production, separated by long silences. It indicates that the mine was only viable at times of high copper prices, and always extremely sensitive to metal price fluctuations.

In 1868 the first company (Prince Alfred Gold Mining Company Ltd) was re-formed as the Prince Alfred Copper Mining and Smelting Company. By early 1869, ore was being extracted from an opencut. Three shafts were put down on the site by July 1869. At first, the ore was taken by dray to Port Augusta, and shipped to the English and Australian Copper Company's smelter at Port Adelaide. By the end of the year, £3,000 worth of copper metal had been produced.

By 1870, the Prince Alfred Mine was concentrating ore with three small jigs, two of them obtained from Burra, where operations were winding down. At the end of the year, the directors decided the time had come to equip the Prince Alfred Mine with more efficient machinery and a smelter. This was a period of development, with the shafts being sunk to 270 feet (82 metres), 150 feet (45 metres) and 100 feet (30 metres), and the value of copper produced in 1870 trebled to £9,000. In 1871 a reverberatory furnace, fuelled by firewood, was built to smelt copper on site.  It had its first firing in June 1871, by which time the engine houses were also under construction.

Construction of the second furnace began in August 1871, and the engine and crusher were at work by 22 November 1871. Evidence on site shows that the machinery was powered by a horizontal steam engine, and crushing and concentrating were done by Cornish rolls and a jig. There is no remaining evidence of how the Prince Alfred Mine was pumped. The following month the second smelter was firing, and work had started on a third. The second smelter was to be a calciner or roaster to drive off sulphur before smelting proper. The third smelter was a backup, to take over when one or both of the others were down for maintenance. By March 1872 the engine was also pumping water from the nearest mineshaft, called the Engine Shaft. The third furnace was fired in April 1872, and the Prince Alfred Mine's infrastructure was completed in almost exactly twelve months from commencement.

The copper price was not the reason for closure, as it was buoyant in 1874, although it would crash three years later. No-one made any suggestion of fraud. There are hints that as the mine went deeper, the copper grade was falling, and sulphide ore, more difficult to treat, was beginning to dominate the orebody.

In the 1950s, the Mines Department reviewed South Australia's copper resources. They investigated the Prince Alfred lode by diamond drilling, but no copper of commercial interest was found.

In 1967, a group of former Broken Hill miners took over the Prince Alfred Mine while the copper price was high and set up a new plant. Their plan was not to re-open the Prince Alfred Mine, but to extract copper from old mine tailings by leaching. They first came to the notice of Carrieton District Council in February 1967, and the following year Council rebuilt the road into the Prince Alfred Mine. They are said to have formed a company called Minerals, Metals Reclamation and Mining Pty Ltd, but the Australian Securities Investment Commission database has no record of a company of that name. A journalist visited the site in 1971 and described a self-sufficient small community built out of recycled bits, with prefabricated former Housing Trust houses powered by a second-hand diesel generator. This tailings reprocessing operation continued until sometime in the 1970s, but it is not known when it closed or how much copper it produced. Mines Department notes record about 600 tons of copper, which was worth $1,600 per ton at the time. 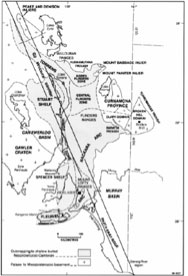 The Prince Alfred project is located within the Adelaide Fold Belt (Geosyncline) in South Australia. The project is bordered by the Murray Basin Province to the east, and the Torrens Hinge Zone and Gawler Craton to the west. Priess (2000) defines the Adelaide Fold Belt as several sedimentary units that have developed during Neoproterozioc rifting with the distribution of the units controlled by the Delamerian Orogeny (~500 Ma).

The figure below shows the generalised tectonic setting of the Adelaide Fold Belt with the Prince Alfred project located on the eastern side of the Nackara Arc, possibly within the G2 structure corridor The Adelaide Fold Belt is overlain by sediments of Cambrian through to Cenozoic age.

Preiss (2000) describes the Central Flinders Zone as dominated by open dome and basin interference folds and the Nackara Arc (that is host to the Prince Alfred Mine) an arcuate belt of linear, upright, concentric folds to the north and south. The Nackara Arc consists of long linear synclines, separated by an anticline or strike faults with the folds trending N to NNW in the southern part of the Nackara Arc and ENE in the northern parts.

The Yednalue Anticline is the main structure in the project area with the Prince Mine located above the unconformable boundary between the Burra and Umberatana Groups. The main lode of the Prince Alfred workings is parallel to bedding and is situated in the lower part of the Tapley Hill Formation of the Burra Group.

These consist of blue-grey well laminated siltstones. Thin bands of coarse sandstone are interbedded with the siltstones. Finely laminated black shales occur immediately east of the mine and are underlain by a tillite. The tillite rests with marked angular unconformity on the underlying rocks of the Burra Group (Binks, 1971). 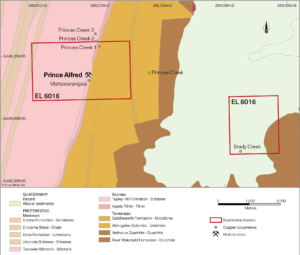 The mineralisation within the Tapley Hill Formation is currently considered to be a stratiform deposit. It is associated with primary sulphide mineralisation in gravel units that are in close proximity to a sideritic band within the lower section of the Formation. Zones of mineralisation have possibly formed from secondary enrichment of lower grade sulphides within the sediments of the lower Tapley Hill Formation. The process of enrichment may be related to mineral rich hydrothermal fluids active during the Delamerian Orogeny or alternatively to post orogenic meteoric waters circulating through the many fractures within the Yednalue Anticline. (Miller, 1999)

Sedimentary hosted copper-cobalt mineralisation associated with syn-sedimentary pyrite is potentially analogous to deposits such as those in the Central African copper belt or in South Australia such as Mt Gunson or Khamsin.

Miller (2001) provides an overview and description of the mineralisation of the Prince Alfred Mine based on field observation. The key points are summarised below:

Reserves and Resources
The Prince Alfred Mine has no compliant reserves or resources under the guidelines of the Australasian Code for Reporting of Identified Mineral Resources and Ore Reserves, 2012 (the “JORC Code”). No historic data from its period of operation was preserved.
Potential Future Development

The target at Prince Alfred is firstly to test the depth extent of mineralisation down dip of the historic workings. Whilst a geologist (Nixon) in the 1950’s from the Mines Department of South Australia attempted this by drilling three holes, it is LAM’s view that none of these holes were actually drilled in such a manner as to test the depth extent of the Prince Alfred Mine mineralisation. The first hole, DDH1, was not drilled to a sufficient depth, as shown in the figure below, and the second hole DDH2 was drilled to the south of a fault which bounds the mineralisation. The third hole was drilled to the east and was intended to test a gossan unrelated to the Prince Alfred Mine orebody.

The aim would be to test the mineralisation with approximately 5 drill holes (reverse circulation collars and diamond tails). If successful, it would lead to a further programme aimed at defining of a JORC resource. The aim of that programme would be to identify a resource of between 1 to 2 million tonnes of between 2 to 5% copper. 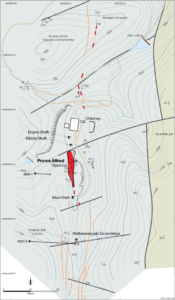 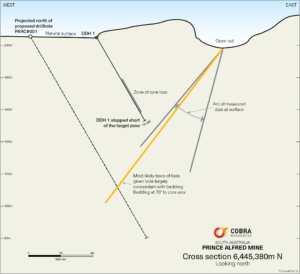 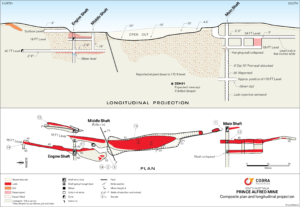